Not cool, Farkle the Elf.

“Elf on a Shelf” is the thing to do this holiday season. Often as I put Pringles down for first nap of the day, Billy Bush and his emaciated co-host, whose name won’t stay in my head, are yapping about where the elf is today. I think there’s one on “Today” also, but all that morning programming runs together for me.

As soon as I heard about these charming little elfs who watch for niceness and naughtiness all day, then use “Christmas magic” to fly to Santa at night and report back, I knew that Kelle Hampton had to be all over that shit. I was not wrong. She had a knee-slapping tale about how her mother-in-law had accidentally touched the elf, and her little sprite daughter screamed at the top of her lungs, because according to the badly written and poorly illustrated book, the elf will lose its magic if you touch it.

I cannot believe Kelle Hampton passed up an opportunity to say to her mother-in-law, “OH MY GOD! YOU RUINED CHRISTMAS!” and burst into tears of grief and horror. That’s what I would do. Instead of getting on the phone and pretending to call Santa, only to remedy it all with some song and dance (literally, a song and dance restored her elf’s magic), I would ring up “Santa” and be all “A blood sacrifice is required? Done and done.”

I couldn’t help but purchase an Elf on the Shelf myself.

Mine is brown-haired, brown-skinned and brown-eyed. Viva named him Farkle. We read the book once, and she never asked for it again. She’s much more interested in Huckle, Lowly and Bananas Gorilla right now. So Farkle was mostly forgotten.

I even touched him, which I figured was no big deal. After the dog took him to her bed as a chew toy, I felt it was a kindness to retrieve him. It turns out, however, that the other elves at the North Pole are like children on the playground. They sense when one of their own is different and they shun him. Farkle is a “touched elf,” and everybody knows it. They know it isn’t his fault, but that doesn’t stop them from treating him like a second-class citizen. It’s very sad. The effects on Farkle started showing up as simple rebellion.

He knows that’s Odie’s “Elder Scrolls V: Skyrim” and he isn’t allowed to touch it. I told him in no uncertain terms, “NOT COOL, Farkle.”

Every night, Farkle flies to Santa to report about how good and bad my kids were, and in the morning, we find him in a new spot. I am not always thrilled about where he turns up. 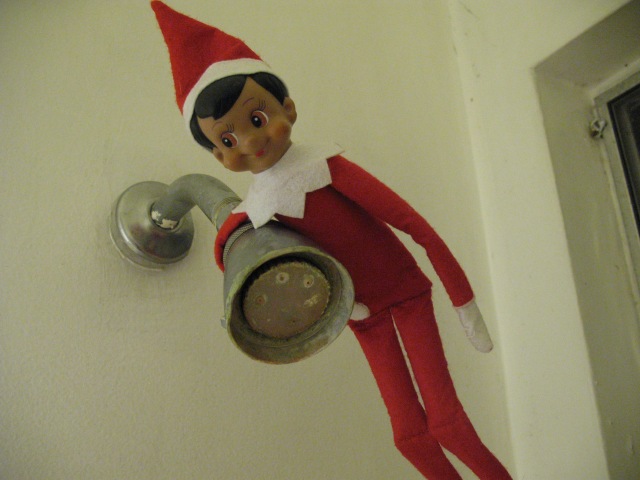 A) we need a new shower head. Secondly, what a perv!

I think Farkle started to feel my disdain. I say this, because he began to act out. 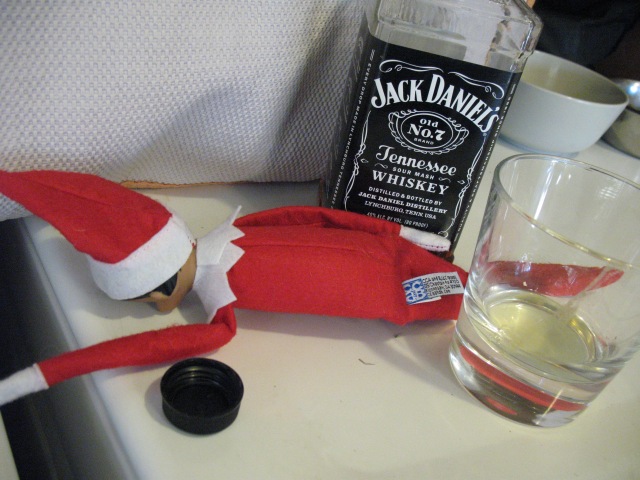 Cleaning up elf barf does not go on my list of “the joys of the season.” 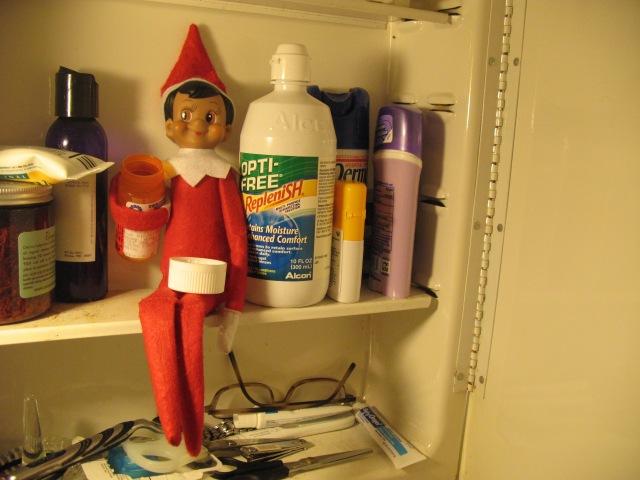 Damn it, Farkle! That was my last refill!

It’s been a rough week, and I’m glad Farkle will be going home on Saturday. I’m hoping the North Pole provides some sort of counseling for Touched Elves. Maybe after a year in a specialized program, he’ll realize it wasn’t his fault and that he isn’t alone. I feel hopeful because he made at least one very influential friend in my home.

Godspeed, Farkle, and so long. We’re probably going to move in September, and if you don’t get a change of address notice… Hey, it isn’t you. It’s me.

Like you, only funnier.
View all posts by Mrs Odie →
This entry was posted in Parenting, Pure side-splitting comedy and tagged Christmas, Elf on a Shelf, Kelle Hampton, Skyrim. Bookmark the permalink.

10 Responses to Not cool, Farkle the Elf.