I grew up on the sets of television shows, starstruck as hell. My friends at school didn’t allow me to talk about it. They treated me like a stuck-up bitch whenever I mentioned my dad’s profession. I’ll never forget the writers’ strike in the early 80s for so many reasons, but in particular, this one little sixth grade bitch gleefully announcing to other kids “Her dad got FIRED!”

My insistence that my dad had not been fired only made the story seem more true. I seemed defensive and desperate in my denials. The fact was, my dad was unemployed and that was hilarious and awesome to the entire 6th grade.

I was devastated to no longer be able to hang around famous actors or sit at my dad’s desk and pretend I was writing scripts. My peers laughing at me and celebrating my pain made it oh so much worse. I didn’t confide any of this in my parents. The strike meant nearly two years that my dad couldn’t work as a writer. It helped to end my folks’ already shaky marriage. And those shits at school thought it was funny.

The person I did feel comfortable confiding in was my teacher, Mrs. W. There were two sixth grade classes at my elementary school, the cool one and mine. This is how I remember the teacher of the other class: 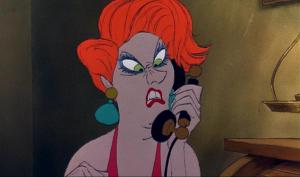 But in my own teacher, I saw a confidante. A friend. When she pulled me aside to see why I was sobbing, I explained that my dad’s show had been cancelled and there was something called a strike preventing him from getting another job. She dried my tears, but sighed heavily.

“Well, you brag too much about your dad’s job and it makes the other students dislike you.” I remember arguing that I was proud of my dad and I loved going to the weekly tapings, but I never bragged! I didn’t think I was better than anyone else. I just felt happy. Until that conversation, that is.

In high school, I did some acting work. Just a bit part on my dad’s show. I had to audition and not get called back several times before I finally earned three lines in an episode with a bunch of guest stars. I was not a good actress, but that hardly stopped one from being on television in the eighties. I wasn’t allowed to talk about it among my friends because it meant I was “stuck up.” When the episode aired, none of my friends said shit to me about it, not even my best buddy.

Scouring through my usual blogroll of people I hate, I read a post by my least favorite Mommy Blogger where she was hanging out with a couple other even more famous Mommy Bloggers and posting selfies of the group of them. The Real Housewives of WordPress dot Com.

Not that any of them is slumming at WordPress. Each of these duchesses of the internets has her hosted blog with agents, publicists, and hangers-on. Dozens of commenters typing excessive punctuation populate those sites.

Look at them, I thought to myself. All trying to get some more clicks off of each other. Do I do that? Would I do that? Why are we all even in this “Mommy Blogger” world anyway? Do we just want to get where Glennon is? It doesn’t seem to be making her happy.

I read her article and liked what she had to say about how they keep moving the finish line. I can relate, because for me, I was all, “Yay! I got out of my pajamas!” and then my husband was like “Are you going to maybe do a load of laundry or something?” and I just collapsed in a crying heap screaming “Why even try?!” so Glennon and I are in exactly the same place in our lives right now.

She’s taking 40 days off of the internet. I almost heard the thunderous “BOOM!” as other bloggers rushed into that vacuum. Millions of people read this blog, so that’s a lot of readers who will need to go elsewhere. I’m sure that her publicity people have worked it out with at least one other writer’s publicity people for her to be that elsewhere. None of this stuff happens by accident. None of it. I learned that much from hanging around my dad’s business all of these decades.

Name-dropping Glennon of Momastery and mentioning her 40 day blog-cation will probably get people some clicks. And then what? My dad told me a long time ago that nepotism only gets you in the door. You have to have something worth sticking around for.

Now, Dad was talking about what he could do for me. Name association, or name-dropping, or hanging out with famous people can sometimes work out, but those associations can hurt as much as they help. Kim Kardashian was famous for hanging around Paris Hilton. The former just happened to have the kind of “momager” who knew how to take her daughter’s ripped-off idea of doing a sex tape and turning it into a mountain of gold for herself and the whole family.

For every Gwyneth Paltrow or Angelina (Voight) Jolie, there’s a Jaden Smith, Daniel Baldwin, and Michael Lohan. Kim got famous for tagging along with Paris, but that also worked out for Naomi Watts (Nicole Kidman) and Toby McGuire (some guy named Leo).

Those of us name-dropping Momastery or hashtagging Glennon in hope of making bread out of stones can’t really be blamed, can we? As far as taking my dad’s advice though, I just hope that I’m more Robin Thicke and less Khloe Kardashian.

Like you, only funnier.
View all posts by Mrs Odie →
This entry was posted in Confessional Stories of my Past, Essays/Commentary and tagged 40 Day Blog Vacation, Glennon Melton, Momastery, Mommy blogging, Name-dropping, nepotism. Bookmark the permalink.